Home Archives About Me Subscribe Thumbprints The Catholic Blog
Acceptable and unacceptable eye rolls, your own experiences vs. your kid's present and future, and why military bases aren't the always the worst
What I'm going to tell my kids tomorrow

The bathroom remodel is done. I know. I KNOW.

Three months, folks. Three months to the DAY. He said 6 weeks or so, I expected two months, maybe two and a half, and those last two weeks were killer. And things got tense - not between our bathroom guy and me, nope, we're besties - but between Phillip and me because I wasn't being the Taskmaster Project Manager at home and I felt his expectations were insane and *yoga breath*.

And isn't it funny that that's the first thing I need to tell you? That my relationships stayed intact and conflict was kept to a minimum (in public, at least) and A+ ON YOUR FIRST REMODEL, MAGGIE CHEUNG.

The bathrooms? Oh, they're pretty awesome. I QUITE enjoyed that process, to be perfectly honest. The plumbing part was beyond boring and don't get me started on having to wait around for WIRING, but the picking stuff out and watching it go in and making design decisions on the fly with your bathroom builder? Oh yeah, I liked those parts. I would totally do those parts again. Should we start pestering Phillip about the kitchen? Hmm? 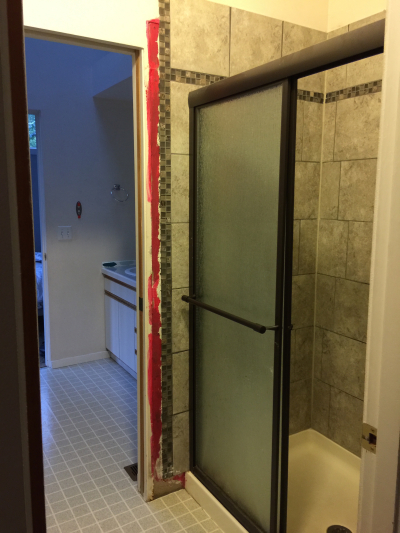 MY EYES, MY EYES. 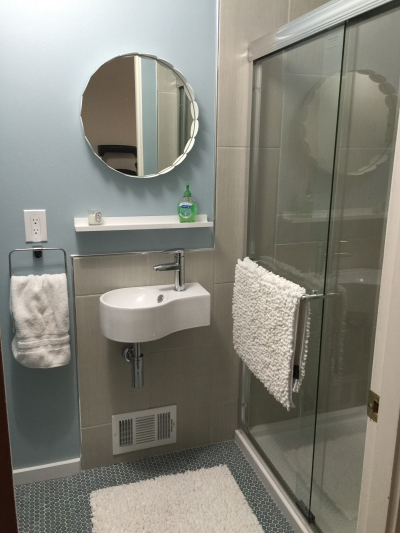 The other bit of that side of the bathroom used to look like this: 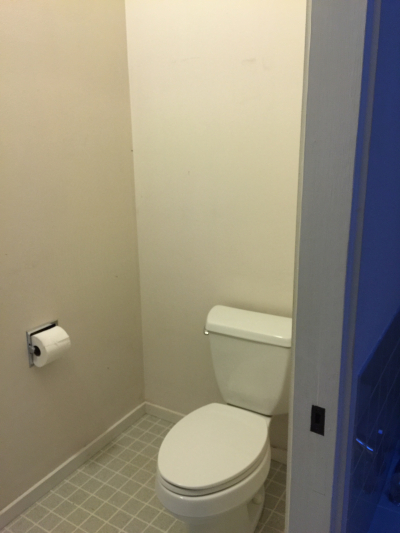 That little wall was a pocket door that divided the lone upstairs jack-and-jill bathroom between the hall and our bedroom. We walled it off to create two separate bathrooms.

Not the right angle, but now it looks like this: 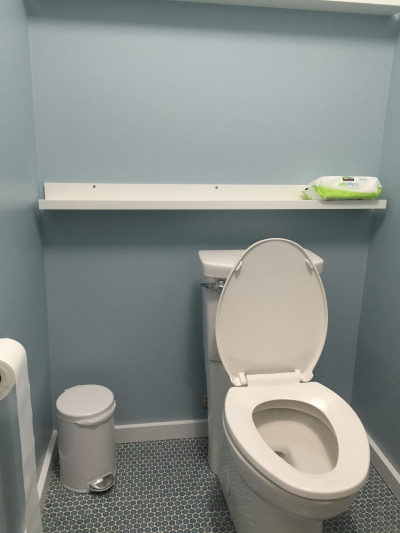 I have 3 picture ledges on that wall above the toilet (talllll ceilings) and nothing to put on them. YET.

My thoughts on the hall bathroom: I love the floor and the tiny sink and the mirror and the hanging modern lamp that I couldn't take a picture of because it's too dark with it off and too eye blinding bright when it's on. I like the shower tile, though it reads light gray on the floor in the master bath and everywhere else except THIS bathroom, where it reads BEIGE and BROWN. Which is not QUITE what I was going for, but OH WELL. Also the paint color. This is the SECOND paint color. (I painted. I didn't make anyone crazy.) The first was too light. This one is not quite dark/gray enough. I didn't want to go dark here, but I think I should have gone a bit less Little Boy Bedroom. But you know what? OH WELL AGAIN.

The rest of the bathroom used to look like this: 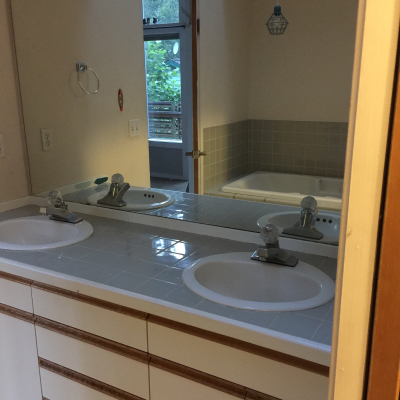 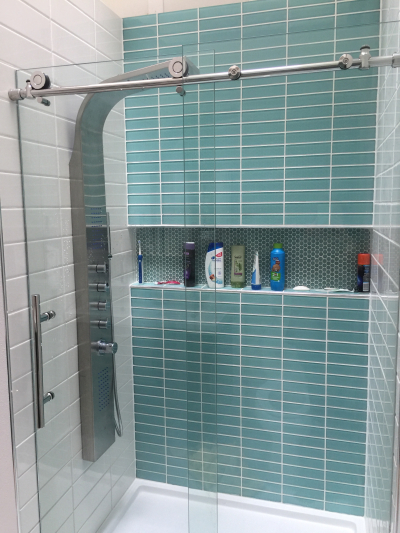 And a little bit more: 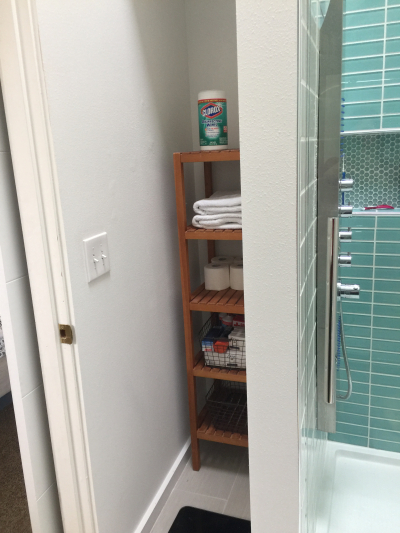 We were going to do some built in shelving there until our budget and and brains caught up with us. For now that old shelf from our first apartment is working juuuust fiiiine. Also you can sort of see the barn door we hung on our bedroom wall to fix the awkwardness of the swinging-in door in the too-small space. 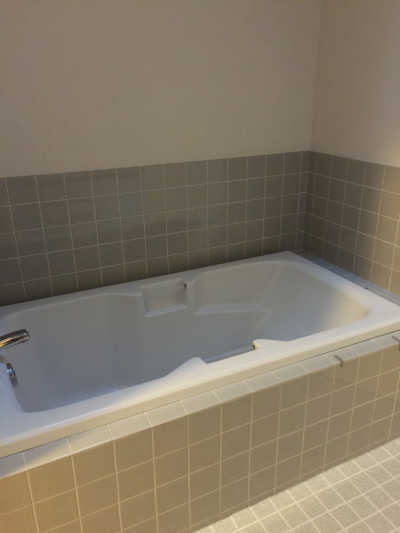 And again, wrong angle, but it looks like this now: 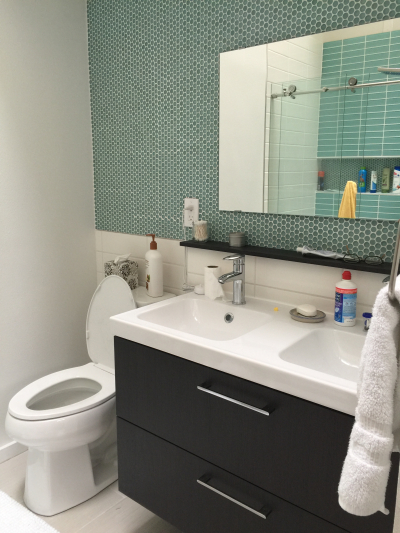 There is pretty much nothing about this bathroom that I do not like. Favorite everything. It needs a toilet paper holder and some pretty stuff on that little ledge above the sink and something nicer in the little storage area, but I am Rawther Delighted with the whole thing.

Oh wait, that ridonkulous shower head. Not my favorite. But Phillip picked out one single thing for this remodel and it was that shower head. (Well, and the dozen too-smart-for-me switches and electrical thingies. Those don't count.) Anyway, the shower head, yes it does spit out water from, like, five different places, but it's mounted too tall for me to take advantage of them properly, ahem, but when your husband lets you spend an ungodly amount of money on blue tile where you could have just slapped up some paint, you allow a ridonkulous shower head.

In terms of what we picked out and finishes... I did buy fancy blue tile. The glass penny tile in the master bathroom was not cheap. But the blue glass bricks in the shower WERE cheap, because I got samples from every company under the sun and basically found a perfect dupe of the really expensive tile I fell in love with. Boom. All other tile off the shelf from Home Depot. (Oh the floor penny tile I ordered from Home Depot sight unseen.) Vanity, sink, pendant light I didn't show you, and some hardware from Ikea. Both shower doors, shower head, and faucets from Amazon. Barn door, toilets, shower bases, pretty much everything else from Home Depot, even the tiny sink which took me nine million years to pick out, SIGH. And that silly round mirror is from Crate and Barrel and I wonder if it looks a bit odd, but don't tell me, because I love it so.

NOW FOR THE KITCHEN!

I LOVE it!!!! Such great colors! Like the perfect mix of Color Burst and Still Serene and Spa Like! And yay for surviving a THREE MONTH renovation!! Woo!

I also LOVE LOVE this. If we redo our bathroom again, I'm going to totally pick out some awesome accent tile. LOVE the fancy blue you picked, it's so beautiful. Congrats! three months sounds like forever but also like a doable time for a reno. Nice job bathroom guy! Thank you for sharing the pics :)

I'm in love with the penny tile! Everything looks great and the round mirror is perfect over the tiny sink! Aren't you glad to not have a contractor in your house every day? That's my least favorite part of reno, having to force myself to engage every day.

The comments to this entry are closed.