Home Archives About Me Subscribe Thumbprints The Catholic Blog
Do you have a Thing? Here's ours:
What happened with kindergarten, plus Free Time, how do I maximize it?

I bought Molly a super cute jean jacket. Tonight I asked her where it was. She doesn't know. We have determined she left it at school the very first day she wore it, which was probably like a month ago. I bet it's gone for good. This is the second jacket she's lost in a matter of weeks. I JUST.

Emma has been SO tired and whiny and awful and maybe it's the heat? But also maybe it's Four and have I forgotten all the random bouts of unpleasantness with the other two? Did I never think Emma might be moody or temperamental or maddening?

I started losing weight, which was great, but the last month or so has been a standstill because Life and Tired and Meh. I had a goal in mind for when we visit Phillip's brother in Cincinnati and I don't know if I'm going to reach it.

Our school boundary situation remains unsatisfactory, to say the least, and now a group of parents from lots of schools are gathering on their own to talk boundaries and what to do tomorrow night. Half of me REALLY WANTS TO GO, even though I have to drag the kids along (Phillip is still out of town), because I just want to stay in the know. And then half of me wants to have dinner at a friend's house and let the kids go wild on the trampoline and have actual fun, because now that lots of parents from lots of schools are getting het up about their boundaries, more reason for the school district to look at ours and go, "Oh, we can't change it because of the domino effect." Seattle Public Schools has made me a cynic and I'm mad at them for it.

SOMEONE in my neighborhood smokes pot outside and stinks up my backyard nearly every night.

I have bug bites.

I am REALLY annoyed about that jean jacket.

I hate how I can have a great day with the kids, but then homework/dinnertime/bedtime/clean up/teeth/no REALLY we need to CLEAN UP can undo so much of what was good.

Oh you guys. I HAVE consolations, I was getting ready to write them out, but as soon as I finished typing CONSOLATIONS, Jack tip toed upstairs and gave me this card: 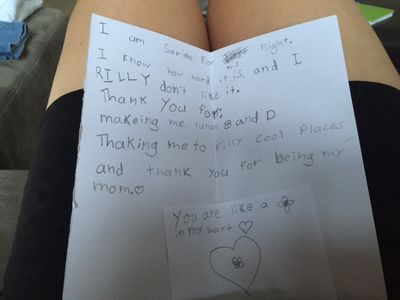 I RILLY don't like it when I'm like this EITHER. I'll keep trying to be better, kiddo.

Jack is too dang sweet. My goodness you are doing something right Maggie!

JACK. Oh my goodness, what a dear sweet child.

Somehow he knew just what you needed. My youngest loses so much of his stuff it drives me crazy!

The comments to this entry are closed.